On February 26, 2021, LI Chen attended virtually the 2nd Tokyo Global Dialogue hosted by the Japan Institute of International Affairs (JIIA). LI is a Research Fellow at the Center for International Security and Strategy, Tsinghua University (CISS), and an associate professor at the School of International Studies, Renmin University of China. He spoke at the session on “US-China Military Balance and Prospects for Arms Control” at the round of “Thematic Analysis”. The session was moderated by Professor Satoru Mori from Hosei University, Japan, and featured presentations by Izumi Nakamitsu, UN Under-Secretary-General for Disarmament Affairs, and Ralph Schriver, former US Assistant Secretary of Defense for Indo-Pacific Security Affairs and Chairman at the Project 2049 Institute. 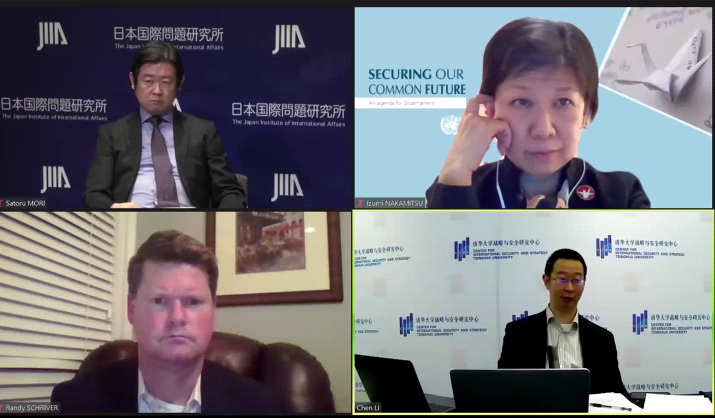 In his keynote speech, Randy Schriver introduced the major factors affecting the current US-China military stability and deterrence posture, and made recommendations on advancing communication between the two militaries and maintaining regional stability in light of the Indo-Pacific security challenges and the prospects for US and Chinese military development. Subsequently, Izumi Nakamitsu noted that mechanisms for international disarmament, non-proliferation and arms control are important tools for maintaining world peace and security that interacts with great power relations. Considering technological upgrades and geopolitics, all stakeholders should deliberate on a new vision for arms control and engage in effective international cooperation.

In his speech, LI Chen responded to JIIA’s questions by introducing the basic principles of China’s defense policy and analyzing the military deterrence and crisis management posture in the Western Pacific region. He stressed that China pursues a defensive national defense policy, emphasizes territorial sovereignty and national unification, and adheres to the no-first-use policy on nuclear weapons. Meanwhile, China is an active participant in international security cooperation and confidence-building mechanisms with a focus on the importance of regional stability. Military deterrence in the Western Pacific is steered by such factors as military power contrasts, geography, political intentions, and perceptions of war. The new military power contrast has catalyzed the evolution from US unilateral deterrence to mutual deterrence. The oceans have eased the security dilemmas but heightened uncertainty. Security hotspots in the Western Pacific have different political implications for China and the US. The long peace has shaped the perceptions of war on all sides. Although neither China nor the US wants a head-on conflict with each other, the latter’s overemphasis and overreliance on a narrowly-defined crisis management mechanism fetter effective competition management. Therefore, it calls for all parties to push policy coordination and build a security order. 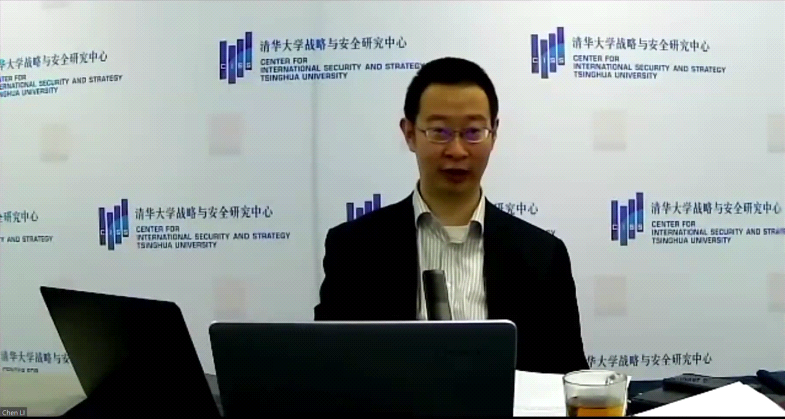 In the Q&A session, participants discussed issues including the situation in the Taiwan Strait, US-Japan security relations, crisis management measures, military innovation, the Quad, the impact of the new technological revolution on international arms control mechanisms, nuclear risks in the Indo-Pacific region, and the development trajectory of multilateral arms control mechanisms. LI Chen made a point that the escalating tensions over the Taiwan Strait was induced by provocations of the Taiwan authorities and the US competitive strategy toward China. In order to maintain stability in the region, China must react and brace for all possible scenarios. China has no intention to dismantle the US-Japan alliance, but it should not affect regional stability. Japan can learn from Europe during the Cold War to keep America’s competitive impulses in check. Furthermore, LI analyzed China’s strengths in military innovation, including its patience with the strategic environment and military power contrasts, an open mindset towards learning, its emphases on the big strategic picture and on the human factor without being bound by technological determinism. Finally, LI zeroed in on the Quad between the US, Japan, India and Australia, stating that despite their effort to increase coordination toward China, the Quad will not evolve into an “Asian NATO” due to divergent strategic interests among the countries. 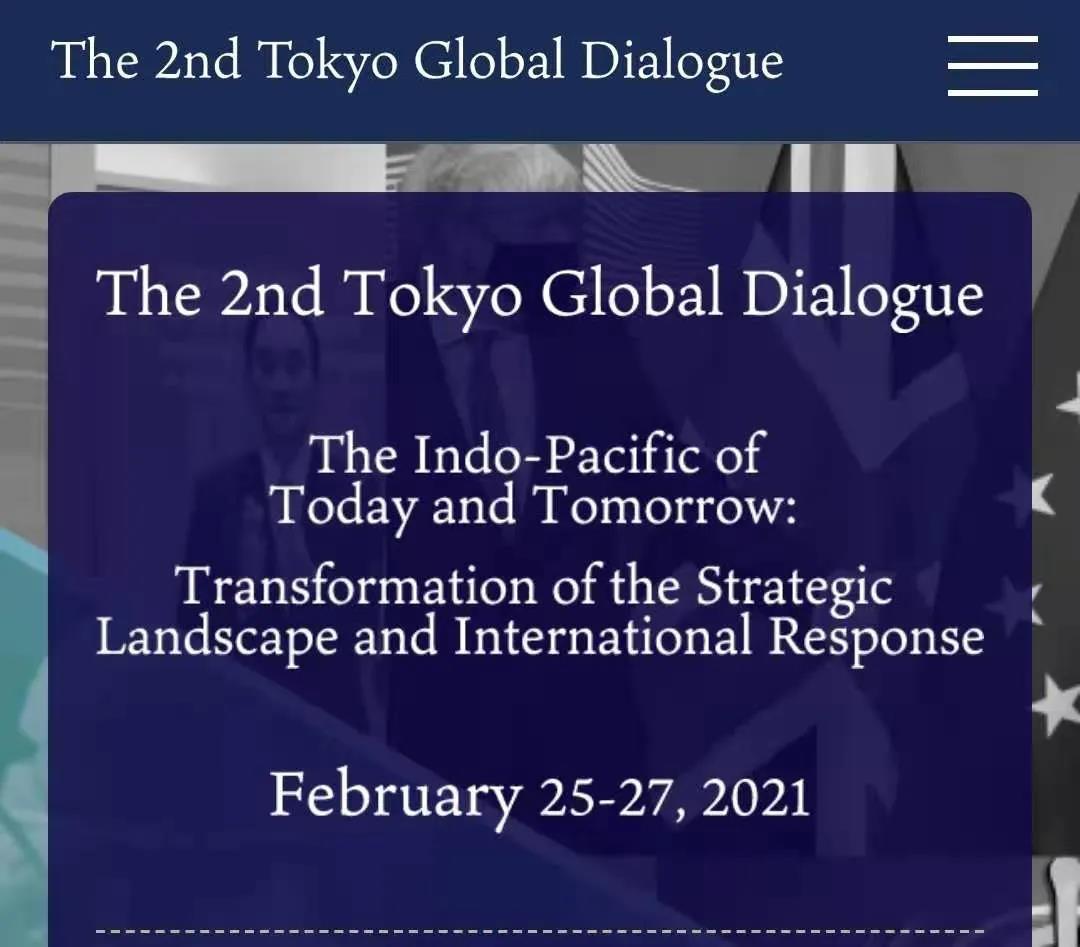 On the occasion of the JIIS 60th anniversary in 2019, the Institute released its first Strategic Annual Report and hosted the first Tokyo Global Dialogue. Following the success of these initiatives, JIIA decided to issue the Report and hold the Dialogue on an annual basis starting from this year. The theme of the Strategic Annual Report 2020 is “The Indo-Pacific of Today and Tomorrow: Transformation of the Strategic Landscape and International Response.” The Second Tokyo Global Dialogue focused on the intensifying US-China confrontation and strategic competition amid the global coronavirus pandemic, as well as on the Indo-Pacific region that is becoming divided and contested oceans. The Dialogue covered 12 regional and thematic sessions. Japanese Prime Minister Suga Yoshihide and Foreign Minister Motegi Toshimitsu addressed the opening ceremony. Among those invited were John R. Allen, President of the Brookings Institution, John J. Hamre, President of the Center for Strategic and International Studies (CSIS), Thierry de Montbrial, Executive Chairman of the French Institute of International Relations, and H. R. McMaster, former US Assistant to the President for National Security Affairs.

Founded in 1959, the Japan Institute of International Affairs (JIIA) focuses on foreign affairs and security issues. As the most prominent and influential think tank in Japan, JIIA enjoys wide support from the political, business, academic and media communities in the country. JIIA was awarded “2020 Think Tank of the Year” in the latest think tank index report of the University of Pennsylvania, ranking 1st in East Asia and 8th globally.

Last：CISS Holds Webinar on “Lessons from the Cold War for U.S.-China Relations”