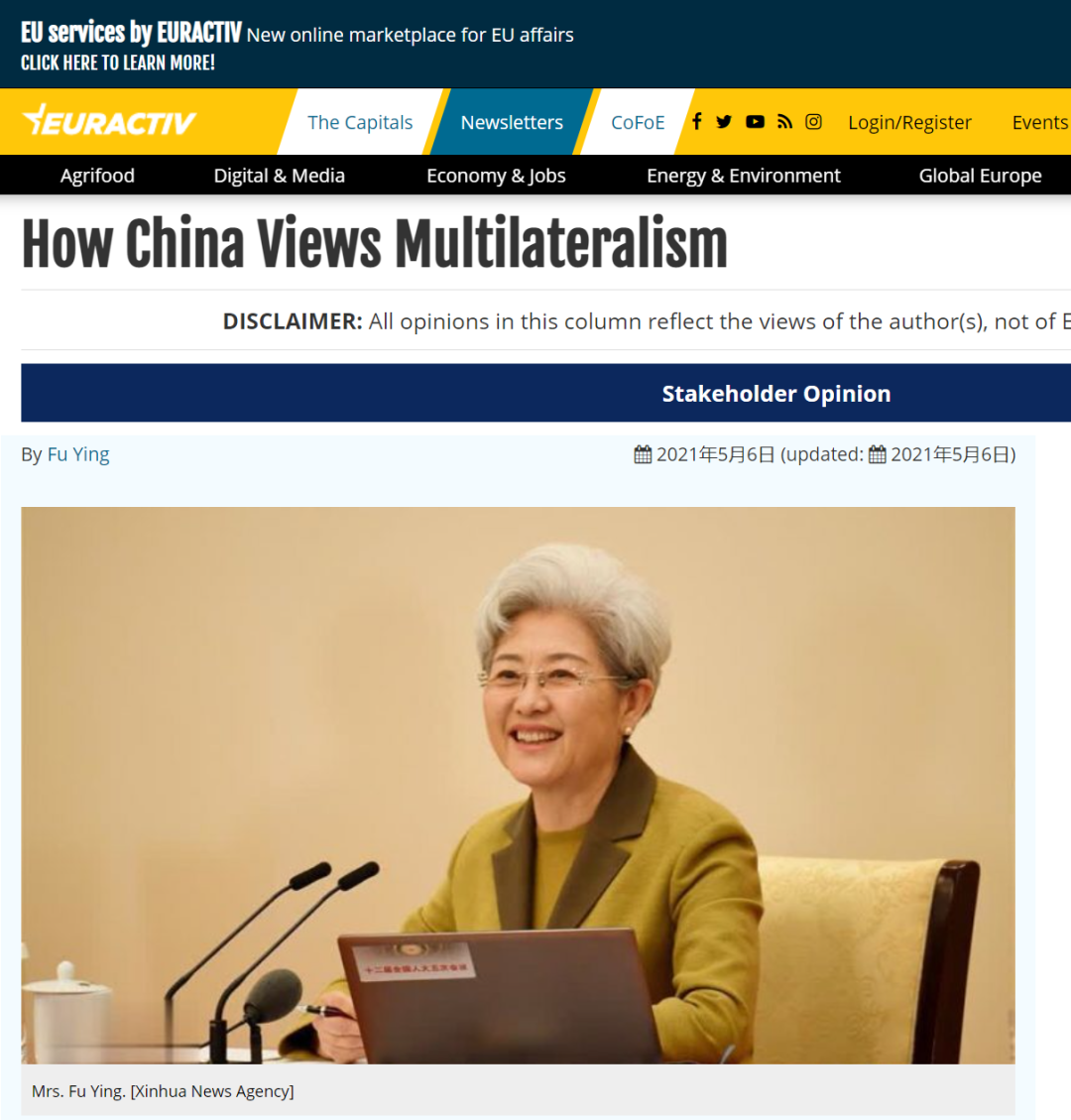 Multilateralism, as we in China understand it, is about seeking consensus through consultation and manage common affairs through cooperation for shared benefits and win-win results. In this sense, China and Europe share a common interest in upholding multilateralism.

We both believe that the challenges faced by humankind should be tackled through international cooperation, and differences need to be addressed through consultations in multilateral institutions within the framework of the United Nations (UN). As John Ruggie, a renowned champion of multilateralism, said that “the definition of the term (multilateralism) means cooperation.” In China-EU relations, cooperation is not only the source of fruitful achievements to date but also the foundation for future cooperation.

In his special address at Davos Agenda, a virtual event with the World Economic Forum, Chinese President Xi Jinping expounded on China’s stance in upholding multilateralism. He said that China remains firm in its position to safeguard the international order and international system that is centered around the UN, and abide by the UN Charter of the United Nations as the basic and universally recognized norms governing state-to-state relations.

China and the EU have established a highly interdependent structure of relations. China’s trade with Europe registered USD 649.5 billion in 2020, making it the EU’s largest trading partner. During the COVID-19 pandemic, China Railway Express (CRE) delivered huge quantities of anti-virus supplies to European states，contributing to their fight against the pandemic. Watching on TV the arrival of CRE trains carrying varieties of European goods and products, I have no doubt that, despite the geographic distance, the two sides stand close with each other and share great potential for cooperation.

In March of this year, I attended the “European Strategic Autonomy” seminar hosted by the Italian Institute of International Affairs (IAI). The impression I had was that, against the background of changing international environment that features tense China-US relations, Europe is stressed by the pressure of major power competition. The concept of “European strategic autonomy” gained attention as a response to world changes.

The seminar provided a chance for me to appreciate the desire among the Europeans to further grow ties and deepen understandings with China. I also realized that there exist misunderstandings and differences between us which is not a surprise as we have grown out of different cultures and history. It gives us greater reason to have more frequent conversations including over various emerging issues to build better mutual understandings. I think it would be dangerous for major players in the world to decide on matters concerning each other based on misunderstandings.

One lesson we can learn from the COVID-19 pandemic in 2020 is that no country can face global challenges alone. Reflecting from a historic perspective, one can see the lack of multilateralism in this battle as the biggest disappointment. Major countries, even international institutions, failed to effectively gather enough strength in the global fight against the virus. Learning from this lesson, China and the EU should not be troubled by differences and focus on common interests and pull through global challenges together by upholding multilateralism. China and the EU should expand communication, increase systematic conversations, and exchange ideas in a calm manner.

Looking back at history, multilateralism was forged with purpose of stopping war and forging amicable ties. It was born for peace. The earlier form of multilateralism appeared long before the  modern international relations took shape. The Peloponnesian League led by Sparta in ancient Greece and the Delian League led by Athens were two examples regarded as multilateral diplomacy in its early days. Similar experience can also be found in ancient China more than two thousand years ago, i.e., leagues of lords during the Spring and Autumn Period and the Warring States Period. In the 20th century, the bitter lessons of the two World Wars compelled people to explore a multilateral mechanism that could coordinate inter-states interests, end wars, and ensure lasting world peace. The founding of the UN and the image of the Non-Violence sculpture at the UN Headquarters voiced, loud and clear, the common aspiration of the international community to uphold multilateralism in international governance.

Since the 1990s, driven by the trend of peaceful development in the post-Cold War period, multilateralism has been more broadly and effectively practiced. Multilateral cooperation have gained new energies around the world, and multilateral consultation and cooperation have become the main channel for finding ways and means for global governance in the 21st century. The UN and its affiliated institutions have been playing a critical role in this process. New world wars have been avoided, many regional conflicts mitigated, and billions of people have successfully risen out of poverty. The UN Charter has become an essential guarantee of world peace and development. It can be argued that multilateralism, as a basic paradigm safeguarding international orders and norms, has gained broad recognition and support.

For many people in China, modern multilateralism is a relatively new concept, which we took time to learn, accept, and then firmly uphold. As China moved fast with reform and opening-up in 1980s and 1990s, there is also growing awareness about the concept of multilateralism along with greater contact with outside world. For example, in Asia, since becoming a Dialogue Partner of the Association of Southeast Asian Nations (ASEAN), China embarked on its journey of participating in multilateral diplomacy and regional cooperation. My colleagues and I visited Canada and many other countries to study the concept and learn about how multilateralism is practised in various fields.

The past years have seen China become a member of many global multilateral institutions. China joined the General Agreement on Tariffs and Trade (GATT), predecessor of the World Trade Organization (WTO), and the Asian Development Bank (ADB) in 1986, and joined the Asia-Pacific Economic Cooperation (APEC) in 1991. China not only plays a role in regional multilateral cooperation centered around the ASEAN Plus format, but also takes the initiative to design and build new multilateral mechanisms. For example, China organized and promoted the Six Party Talks on North Korean nuclear issues, hosted summits for BRICS and the Shanghai Cooperation Organization (SCO), and initiated the Cooperation between China and Central and Eastern European Countries (17+1). Regarding military security, China actively participated in the UN’s Conference on Disarmament, and signed a number of treaties including the Comprehensive Nuclear Test Ban Treaty (CTBT). China highly values multilateral institutions within the frameworks of the UN, WTO, and the Group of Twenty (G20), and vows to safeguard the international system centered around the UN. It is now an indispensable participant and contributor to many multilateral agendas on global development, including economic recovery, climate change, public health, and counterterrorism.

Entering into the 21st century, China has become more proactive in multilateral agendas, by, for example, initiating the Asian Infrastructure Investment Bank (AIIB) and the Belt and Road Initiative (BRI). When the COVID-19 pandemic gripped the world, China not only endeavored to contain the virus at home, but also engaged in extensive bilateral and multilateral cooperation. Specifically, by working with the UN, G20, and the World Health Organization (WHO), China facilitated access for personnel and supplies, helped ease the debt of poverty-stricken countries, donated vaccines to UN peacekeepers[1], and in order to tackle climate change, pledged to achieve a peak in carbon emissions by 2030 and become carbon neutral by 2060.[2] Within just four decades, not only have the Chinese people significantly improved their understanding of multilateralism, but they also achieved a qualitative leap in translating the concept into practice. Therefore, it is fair to say that China, as a large developing country and a latecomer in international affairs, has secured remarkable progress.

Europeans value multilateralism, and the founding of the EU is viewed in the world as a successful product of multilateralism. It is now the most fruitful and sophisticated example of regional multilateralism in the world. As remarked by Federica Mogherini, former High Representative of the European Union for Foreign Affairs and Security Policy, “the European Union is genetically programmed to support multilateralism—multilateralism is in its DNA.” The word “multilateralism” ends with “ism,” which, based on linguistic analysis, often means a sort of “belief.” The Oxford Dictionary defines “multilateralism” as “the quality of being multilateral; the principle or practice of forming agreements or treaties on a multilateral basis.”[3] The Encyclopedia Britannica explains more specifically that these principles are “an indivisibility of interests among participants, a commitment to diffuse reciprocity, and a system of dispute settlement intended to enforce a particular mode of behavior.”[4] Therefore, multilateralism should not be used for the goals or interest maximization of any single party. Sometimes it is even necessary for the parties to make concessions so that one’s own interests can ultimately be met by practicing altruism and safeguarding multi-party interests. I think it is not Europe’s desire to allow multilateralism be used as a tool to serve the interests of one single party. Neither does China.

Multilateralism is now commonly viewed as the right direction for the progress of mankind—that is, it strives to address the interests and concerns of all parties as much as possible through dialogue and consultation, based on principles of equality, mutual benefits, and openness. Opposing exclusiveness and discrimination, multilateralism encourages global and regional multilateral frameworks and mechanisms to play their role in promoting world peace and development in a rule-based manner. When major countries comply with multilateralism, they must restrain themselves from seeking only their own interests; instead, they should consider overall interests and average needs. Multilateralism, if regarded as a belief, should not be one based on a particular political system, but on universally shared common values, such as peace, development, fairness, justice, democracy, and freedom, which underpin a bright future of humankind.

While tensions between China and the US are exerting an impact on the world and the political climate is getting more complicated, Europe needs space for independent thinking. There is no need or reason for Beijing or Washington to ask European countries to take sides. Europe has developed close partnership with both China and the US, which means its interests would be undermined whichever side it took. Moreover, to maintain the integrity of the global system, Europe has the responsibility to persuade and help China and the US to grapple with their differences, instead of expanding contradictions and even splitting the world. 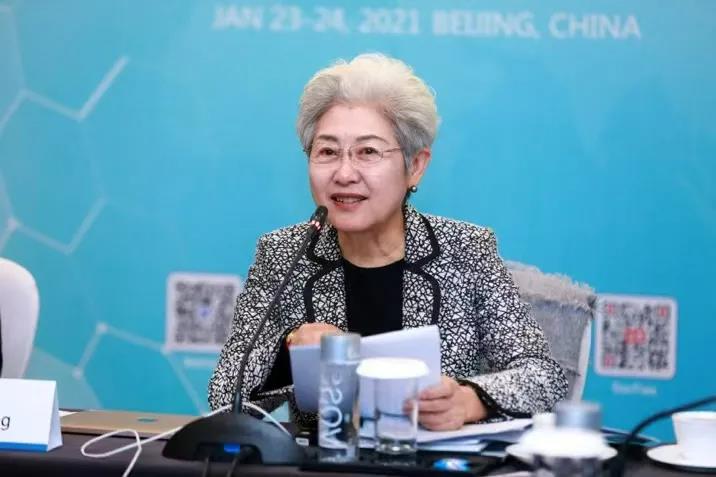 I tend to agree with Charles Michel, President of the European Council, that multilateralism is the key to meeting global challenges. For China and Europe, both important players in the international arena, the key lies in cooperation in an open manner. We should uphold the central role of the UN in international affairs and maintain a transparent, fair, and reasonable international order in which all members of the international community engage on an equal footing. China and the EU should work together on important issues concerning the future of all. For example, for the good of global public health, we should collaborate on the rollout of vaccines and the safe recovery of the world economy and international exchanges. In September 2020, China and the EU signed the EU-China Landmark Geographical Indications Agreement, aiming at building a green and digital partnership. All of these efforts will advance in-depth development of China-EU relations.

In 2020, humanity has experienced multiple crises that are rare in history. As two major forces, markets and civilizations in the world, our close cooperation will be a victory of multilateralism and will render a contribution to the progress of human society.

（Fu Ying is the Chair of Center for International Security and Strategy (CISS) at Tsinghua University and former Vice Foreign Minister of China.）